We've merged Coworking Labs with Small Business Labs and are publishing on coworking there.

We set up Coworking Labs to be our project blog for our Voices of Coworking project, which has ended.  While we continue to research coworking and the future of work, we decided it makes more sense to publish our information in one place instead of two.

Please head over to Small Business Labs and click on our Coworking tag to access our work on coworking.

The coworking movement  started in the U.S., but quickly spread to other countries.   Sometime in late 2009/early 2010 the number of international facilities out numbered U.S. facilities.

At this point coworking is not only growing more rapidly outside the U.S., a lot of coworking-related innovation is also happening elsewhere.

A good example Italy's Coworking Project.  According to Deskmag:

"Italy is home to the Coworking Project, an organization that also promotes flexible workspace within traditional offices and temporary spaces. Pop-up workstations are available in many different locations that might not be considered coworking spaces elsewhere."

You can sign up to get the Coworking Project's English language newsletter here.

We're very excited about the international growth of coworking.  Among other things, it shows how broad the interest in coworking is.  We also think Asia - currently a small coworking region with just 35 facilities - is particularly poised for substantial growth.

Is Austin the World's Most Coworking Intense City?

Below is the Google Trends list of cities ranked by the use of the search term "coworking."  Google develops this data by calculating the ratio of searches for the search term coming from each city divided by total Google searches coming from the same city.  It displays the 10 cities with the highest ratio. 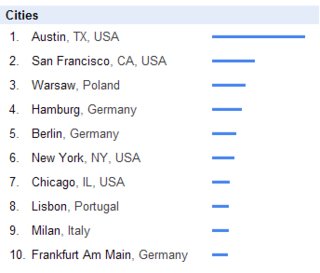 As you can see from the chart, Austin is in first place by a large margin.  Also interesting is 3 German cities are in the top 10, and European cities take 6 of the top 10 slots.

We think of this data as an "intensity indicator," in this case showing us the cities where coworking is generating the greatest interest.

While we often refer to Google Trends, we try not to read too much into the data.  Google itself warns users that the data may or may not be real accurate.  Great quote from their Google Trends FAQ:  "We hope you find this service interesting and entertaining, but you probably wouldn’t want to write your Ph.D. dissertation based on the information provided by Trends."

But our work indicates this data is directionally correct and very useful.

The trend towards the combination of business incubators/accelerators and coworking facilities is, well, accelerating.

For example, Minneapolis coworking firm CoCo announced this week they are teaming up with the tech accelerator Project Skyway to open a new innovation center.

Project Skyway is a Y-Combinator type program that twice a year will provide 10 early-stage software companies with seed money, mentoring, training and networking.  It will be housed at the new facility.

The business logic of combining coworking and business accelerators is powerful, and we expect to see more announcements like this.

The Growing Contingent Workforce and Coworking

One of the important trends we track is the growth of the contingent workforce.  A recent Aberdeen study finds that:

" ... the modern contingent labor umbrella encompasses over 22% of the average organization’s total workforce ..."

They also found that most organizations plan to increase their use of contingent workers in the future.

Extrapolating this data to all U.S. private,employee businesses would mean more than 20 million Americans are contingent workers.  While this is a very rough estimate (the Aberdeen data was not meant to extrapolated this way), even if it's off by a lot it's clear that many millions of Americans work on a contingent basis.

So what does this have to do with coworking?  Many in this very large group of people don't work in traditional offices, making them part of the broader addressable market for coworking facilities.

When you add in corporate distributed workers, the self-employed and small businesses looking for inexpensive, flexible space the potential addressable market gets very, very large - easily 30-40 million Americans or more.

This is one of the reason we are so optimistic about the growth of coworking.

Incubators, Economic Development and the Growth of Coworking

We believe coworking is at a growth inflection point and the number of U.S. and global coworking facilities will substantially increase over the next 5 years.  A key reason for this growth forecast is the recognition of coworking's value as a driver of business acceleration, job creation and economic development.

Business incubators and accelerators, for example, are starting to add coworking options to their facilities.  A good example is VT KnowledgeWorks, Viriginia Tech's business acceleration center.  Their JumpStart community program is designed to provide coworking facilities to "freelancers looking to escape a home-office or no-office situation."

Another example is General Assembly, a business accelerator that functions very much like a coworking facility with one major distinction - membership is by invitation only.  Cooltown Studios, one of my favorite blogs, has an excellent article on General Assembly and its $200,000 grant from New York City's economic development agency.  Key quote from the article:

"What makes General Assembly so significant is that it represents how coworking has finally been recognized by a city as serious job creation."

Also from Arizona is Launch Pad Prescott, which has close ties to the local government.  One of the founders is even the former mayor.

There are over 1200 business incubators in the U.S. and their numbers are growing.  There are also thousands of local economic development groups and agencies looking to create jobs and grow their local economies.

With these groups recognizing the power of coworking to help entrepreneurs build businesses and create jobs, their support and backing will lead to many more coworking facilities.

One of the more interesting questions around the growth of the coworking is the role coworking chains will play.

There is also one example of a large coworking chain - The Hub - which has over 4,000 members in 25 locations across 5 continents.   The Hub uses a franchise-like model to expand and grow.

Central Coworking in London is a good example of a coworking facility hoping to become a large chain.  Although brand new, it's owner plans to open 30-50 branches across the UK.

We think coworking chains will succeed.   The economies of scale, learning curves effects and operational efficiencies that work for other types of chains will also work for coworking.   Smart coworking facility operators interested in growing are already proving this to be the case.

This does not mean that independent coworking facilities will disappear.   There is plenty of room in coworking market for both types of organizations to succeed.

***Update:  The report discussed below has been released***

Following on yesterday's post on corporate coworking, another GigaOm article looks at a study being produced by Regus and Unwired called called VWork: Winning Strategies at Work.

The study appears to be much more optimistic than we are in terms of corporations quickly embracing coworking as an alternative to traditional office space.  Key quote from the article:

"So what we’re doing is aligning the idea of “buy/bring-your-own” which is beginning to get traction in the IT world, with the idea of just provisioning work, so that companies give their employers a stipend, a budget, and the budget is for all aspects of the provisioning of work to suit them and the way they work."

They are also suggesting that many workers will choose 3rd places instead of home to work:

"But if we see a huge change, a sea change, in the way that big corporates are working — if they do reduce their property footprint by 30 or 25 percent — we’ll see tens of thousands of new workers looking for someplace to work, especially in their communities, but that hasn’t yet been provided for."

I found it interesting that the word "coworking" is not mentioned.  It is alluded to in a quote on the quality and quantity of existing 3rd work places:

"You can see them meeting the needs of the freelancers, the contingent workers, who go in with their Macbook Airs and have a coffee and they’re online, but they don’t meet the confidentiality needs and other services needs that they will have to respond to if Fortune companies adopt third space."

The actual report is due out next week and we're looking forward to it - it sounds fascinating.

The "Salesforce.com Effect" and Corporate Coworking

Interesting GigaOm article on the advantages of companies paying for or subsidizing the cost of employee use of coworking spaces.

Our research leads us to believe larger corporations will eventually embrace coworking, but it will take time.  Almost all the corporate lawyers, HR  and facilities professionals we've interviewed have expressed concerns about encouraging employee coworking, with the security of confidential information being a key issue.

Cost is also often mentioned, usually with a comment about Starbucks being free (at least for the company).

Despite the lack of support from central groups, we expect departmental and business unit managers will increasingly allow employees to expense coworking facility costs - especially for employees that travel extensively.  The cost is too low and business logic too powerful for this not to happen.

This "back door" use of coworking facilities will eventually lead to formalized policies and procedures for using 3rd party spaces at large corporations.  We call this the "Salesforce.com effect" because of their success bypassing central IT and purchasing groups and growing their cloud-based business by selling to end-users and department managers.

The FinancialBrand.com has a great description of ING Bank's new branch in Toronto.  Key quote describing the branch:

"The first floor houses the café where people can hang out and enjoy free WiFi along with Peet’s coffee and other refreshments — all at discounted prices.  A team of ING employees are on hand to answer questions about the bank’s products and services, but have no access to customer data so no transactions can occur."

ING's goal is to create a community-oriented space for ING customers, local businesses and entrepreneurs.

Even more interesting is the 2nd floor coworking facility, shown in the picture below.  Quoting again from FinancialBrand: 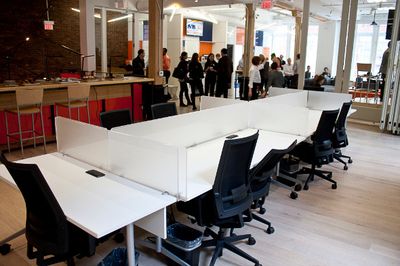 ING currently has Cafe's in 7 locations with plans to open in San Francisco in the fall.  No word yet whether or not the SF Cafe will include a coworking space.

This is a fascinating example of the new localism trend and the trend towards alternative forms of coworking facilities.

Emergent Research in the News